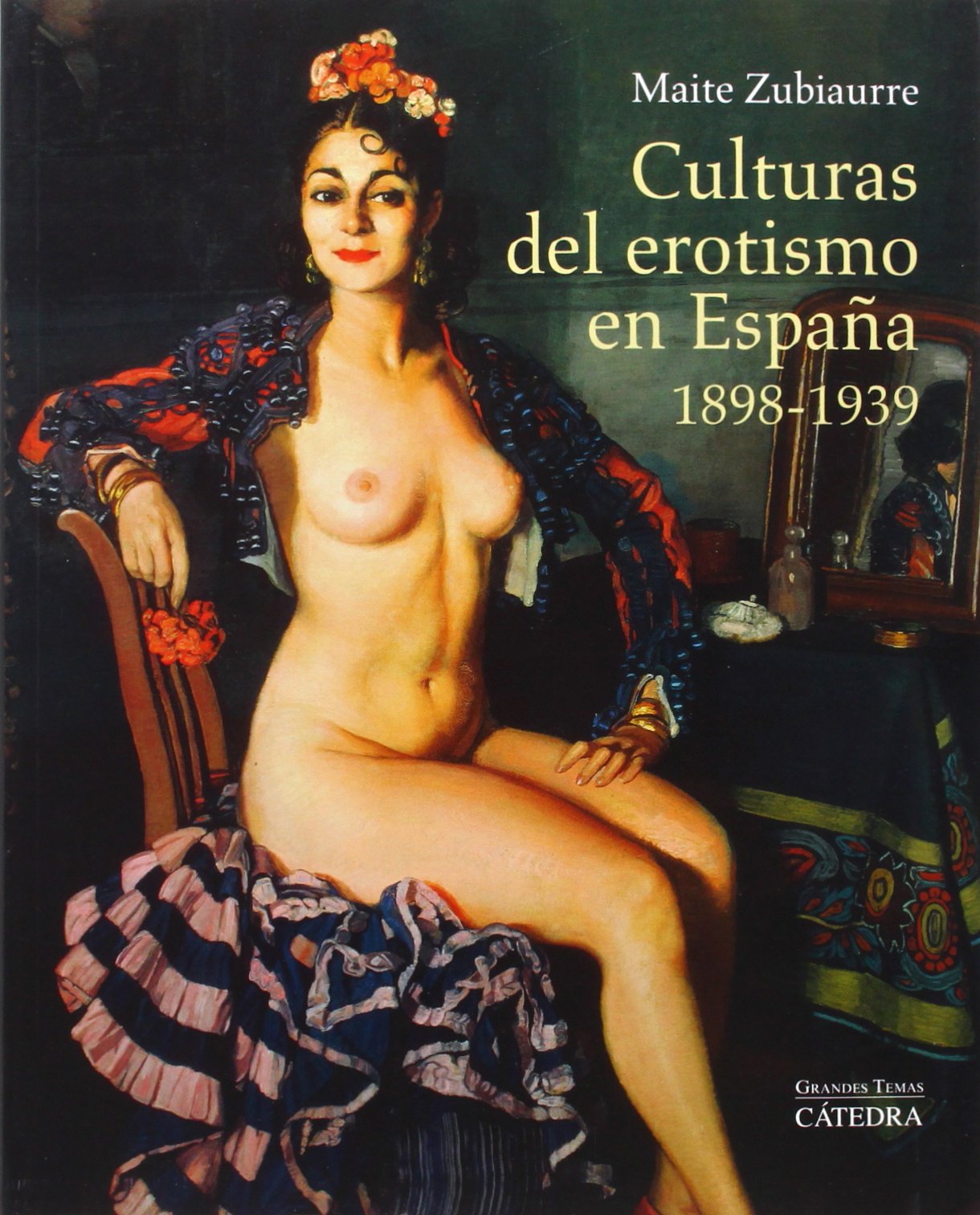 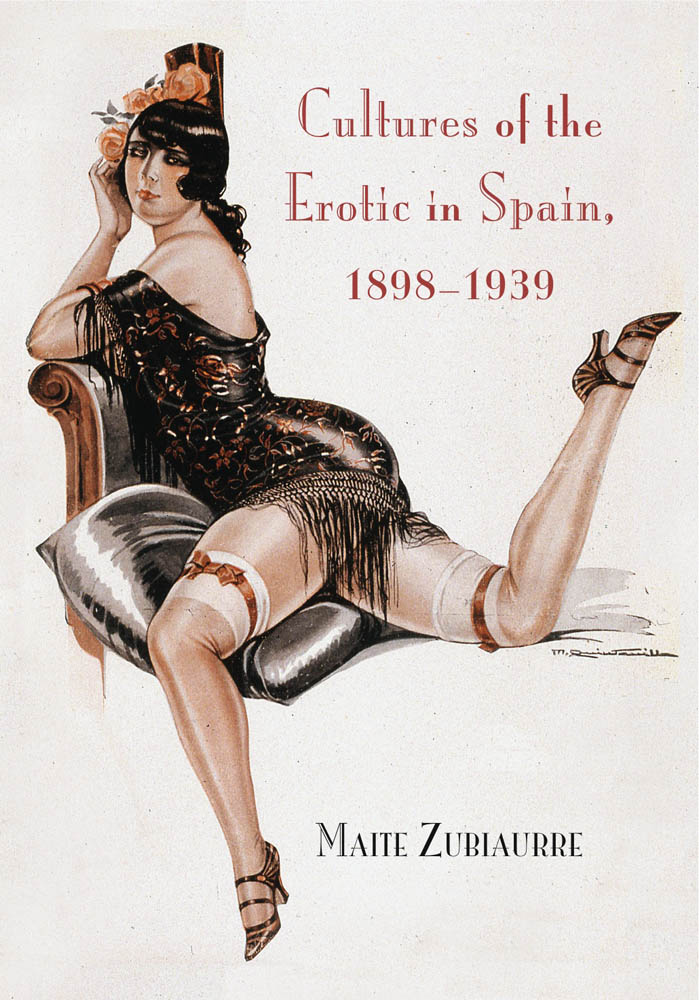 For more information, go to Amazon.com or to Vanderbilt University Press.com

About the VIRTUAL WUNDERKAMMER:

For content-related questions or to submit new media, contact: zubiaurre@ucla.edu

Essays on Sexuality, Sexology and Eugenics: This section includes a selection of articles on love and sexuality that were published in Ortega y Gasset’s Revista de Occidente between 1923 and 1936. Among the authors we find Gregorio Marañón, Georg Simmel, Ramón Pérez de Ayala, Corpus Barga, Amparo Parrilla, Ernst Kretschmer, etc. This section also includes sexological treatises from authors such as Suárez Casañ and Martín de Lucenay, as well as a series of articles and talk on Eugenics.

Nudism: Here we find a selection of magazines, books and authobiographical reflections upon nudism, such as the magazines Pentalfa and Biofilia, Laura Brunet’s fictionalized account of German nudism in Desnudismo Integral, and Martín de Lucenay’s sexological treatise on nudity and nudism.

Spanish popular erotica embraces foreign technology and its inventions to an extent rarely seen in high cultural art and literature. It “imports” modernity in the form of techno-erotic artifacts such as bicycles and typewriters. It also engages modernity and its commodities in an intense and often ambivalent dialogue with tradition and with the production of stereotypically Spanish cultural objects: Spanish majas wearing traditional peinetas made-in-Spain enhance their legs with imported French stockings; dark Spanish beauties leave Andalusia to sit in front of American typewriters in an office in Barcelona or Madrid; sexy middle-class señoritas speed away on German bicycles. Popular erotica is always first to tame these new hybrid creatures made of (imported male) iron and (local female) flesh by converting them into sex objects. Nevertheless, techno-eros ultimately works to the benefit of women. Unlike Spanish high culture (both liberal and conservative), which has a strong preference for traditional female roles and identities and resorts rarely, if at all, to “new” versions of womanhood, popular erotica makes it possible for Spanish women to look beyond the Pyrenees and to seek models in their more advanced and certainly more liberated female counterparts. The same thing occurs in the case of male and female homosexuality, long a taboo topic of high culture: local erotic cultures draw heavily on foreign models.

Without further ado, I invite the user to enter the Virtual Wunderkammer. He is more than welcome to comment on what he finds, and encouraged to enrich our sicaliptic collection with further artifacts.

First, two brief sections on 1) Sicalipsis and 2) The Two Spains and a Third Spain, which are useful to understanding the nature of early twentieth century erotica in its cultural and sociological context:

THE TWO SPAINS AND A THIRD SPAIN

The theory that Spain arrived in modernity as two Spains –a liberal Spain and a conservative Spain whose absolute and intransigent opposition led ultimately to the Spanish Civil War (1936-1939)– has long been a commonplace of modern Spanish historiography. The present book does not dispute the existence of an ongoing conflict between a liberal, anticlerical, and Europeanist Spain and a conservative, Catholic, and nationalist Spain in the early years of the twentieth-century. I am much more interested here, however, in a different division. I seek to distinguish between the “visible” high-cultural Spain that dominates histories of the period and a “ghostly” mass-cultural Spain, the almost entirely forgotten site of popular erotic cultural production. Leftists and right-wingers alike created and consumed popular erotica. Thus erotica constitute a location of culture where the dualism of standard historiographies breaks down. As it turns out, so-called “liberal Spain” is often as staunchly conservative and “un-European” in its attitudes toward sexual matters as is its political opposition. Conversely, “Conservative Spain” showed itself to be far more sexually open and sophisticated than is usually acknowledged. Cultures of the Erotic argues that there was yet a “third Spain,” arising from the site of Spanish popular erotica and sexual (pseudo-) science. It cuts a different cross-section through the dualist historiographies of the period and gives us a new lens through which to view the social conflicts of the period. This “third Spain” frees us from the familiarly canonical view of this culture as dominated by a handful of high-profile male figures who arrived, miraculously, already pre-packaged in “generations.” (1898, 1914, 1927). Our third Spain cuts across class and gender, and bridges the divide between high and low culture. It brings into focus a new early twentieth-century Spain, one both eager for and resistant to new sexual mores and ideas arriving from Europe.

CASE STUDY: ALVARO RETANA VERSUS MIGUEL DE UNAMUNO
Although the two Spains—the chaste and the erotic—were discordant, they nonetheless passionately conversed with each other, and, each in its way, struggled to come to terms with (European) modernity. The two images below (Figs. 1 & 2) indicate even better than words the very different auras emanating from the two contrasting countries. 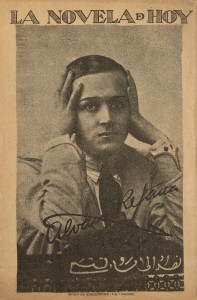 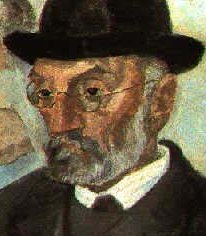 Readers versed in Spanish letters will have no difficulty in identifying philosopher, essayist, novelist, and poet Miguel de Unamuno, depicted in Daniel Vázquez Díaz’s famous portrait (Fig. 2). The much less familiar face above (Fig. 1) is rather enigmatic and is faintly reminiscent of well-known photographs of homosexual poet Federico García Lorca. The young man hugs his face between his hands, as if he were holding a delicate, porcelain mask. Under carefully outlined eyebrows, his dramatic, very black, and heavily made-up eyes musingly look at the viewer. He is unmistakably handsome, with his soft, oval face, and his harmonious features. A signature, written diagonally across the portrait, identifies him as “Álvaro Retana.” But, who is Álvaro Retana? Why do his face and mellow features stand in such stark contrast to Unamuno’s characteristic half-profile, with its pronounced cheekbones, prominent nose, and deep facial crevasses? Retana looks straight at us, with a mixture of melancholy and coquettishness, while Unamuno’s eyes, oblivious to the viewer, seem lost in somber meditation. Unamuno’s mouth is set in a stern downward curve, barely visible between beard and mustache. Retana’s face, however, showcases full, delicately outlined lips and a rather feminine mouth. According to his own proud proclamation, Álvaro Retana was “el novelista más guapo del mundo.” [the most handsome novelist in the world]. Although he was the author and illustrator of many erotic novelettes, a skilled fashion designer, a successful publicist, and the songwriter and composer of some of the most famous cuplés (“Ven y ven” [Come, come to me], “La Tirana del Trípili” [The Tyrantess of the Trípili], “Batallón de modistillas” [The Battalion of the Couture Designers], and “Las tardes del Ritz” [Afternoons at the Ritz]), Alvaro Retana has been almost completely ignored by literary and cultural criticism.

At the tender age of 13, Álvaro Retana fell in love with the famous singer “La Fornarina.” Faithful to his youthful passion for cupleteras, he had what he called “experimental marriages” with three of them (Luisa de Lerma, Lina Valery, Nena Rubens). None of this, however, kept him from multiple affairs with men or from being courted by a solicitous entourage of young (sometimes extremely young!) male and female admirers. Álvaro Retana, who had himself portrayed on his the covers of his novels with a rose-embroidered kimono, plucked eyebrows, and made-up eyes, cruised the warm nights of the Spanish capital in the company of other notorious homosexual writers and artists of the period. Among them were his school friend and painter, José Zamora, who illustrated many of Retana’s novelettes, the writers Antonio de Hoyos y Vinent, Pedro de Répide, Jacinto Benavente, and Federico García Lorca, the ultraist poets Ramón Prieto, Jaime Ibarra, and Rafael Lasso de la Vega y Castilla.Unlike the “high culture” male writers, he was also friends with women intellectuals such as Carmen de Burgos, and Gloria Laguna, “una conocida lesbiana, epigramática, pizpireta y algo varonil, llamada ‘la Benavente femenina’” [a known lesbian, epigrammatic, coquettish and somewhat manly, known as ‘the female Benavente’] (Rioyo 315).

The Unamunos, as Retana with pungent irony called the circumspect members of the intellectual elites, were very familiar with the aforementioned Bohemian crowd and its flamboyant way of life. Although history seems to have forgotten, they constantly met on the streets of Madrid, and were regular clients of the same cafés, cabarets, and theaters.Politics also affected them in similar ways. For example, both Álvaro Retana and Miguel de Unamuno had to endure the rigors of repressive politics and cultural censorship. Unamuno was forced into exile and Retana suffered brief incarceration. None of this, however, produced the expected results. Undeterred by Primo de Rivera’s dictatorship, which, compared to the fascist tyrannies that soon strangled Europe, was much closer to a dictablanda (soft dictatorship) than to a dictadura (real or “hard” dictatorship), Unamuno continued writing incendiary diatribes against the Spanish government. And, before long, Retana was out of prison and back to publishing the deliciously erotic novelettes that had put him behind bars in the first place.

However, similarities between the two public figures end there and I return to the differences so evident in the two portraits. Retana’s world was like his white powdered face: carefully made up, of a highly refined frivolity, ambiguously gendered, sexually uninhibited, lovingly committed to farce, and, most of all, allergic to solemnity and stolid values. It was a world reminiscent of the kitsch and camp of Pedro Almodóvar’s films, a strident joie de vivre, and, as in Almodóvar’s movies, unable entirely to disguise the concomitant presence of suffering and anguish. The specter of syphilis was very much alive at the turn of the twentieth century, as is AIDS at the turn of the twenty-first. It is this world –Retana’s world– and this, sicaliptic, third Spain that our Wunderkammer seeks to collect and to explore.